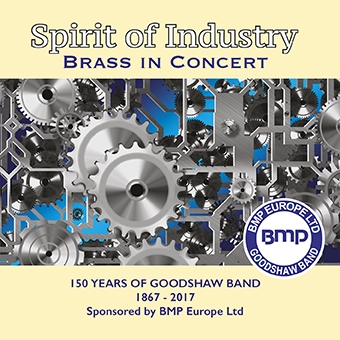 We have recently completed a recording project with the ‘BMP Europe Goodshaw Band’ who are based in the village of Crawshawbooth in the Rossendale valley.

The project forms part of the 150th year celebrations of the Band and the title track, ‘Spirit of Industry’ was written by Darrol Barry and dedicated to Mr Ted Andrew the long standing supporter and sponsor of the Band. The recording took place over three days in September at St Paul’s C of E Primary School in Nelson and the finished product will be available at the Celebratory Concert featuring the Band and the Rossendale Male Voice Choir on Saturday the 21st October at St Mary’s Church, Rawtenstall.

You can learn more about the BMP Europe Goodshaw Band by visiting their website.