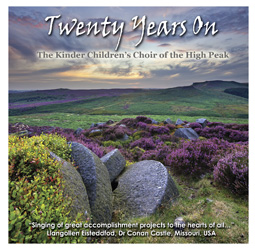 In conjunction with Richard Scott at RAS Audio we have completed the latest recording with the Kinder Children’s Choir based in the High Peak in Derbyshire.

The choirs, set up by former opera singer Joyce Ellis, have been very successful in promoting choral music for young people in the area and some one hundred youngsters aged between eight and eighteen are involved in the five choirs.

You can learn more about the organisation at http://www.kinderchildrenschoirs.org.uk/ 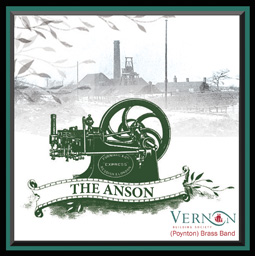 A further release is imminent with the completion of the recording project with the Vernon Building Society Poynton Brass Band.

“The Anson” is the latest release by the north west’s championship section band and the title of the CD is taken from a featured commissioned work written to celebrate the Anson Engine Museum which is based in Poynton.

The CD will be launched on the 10th of December and you can find out more about the band at http://www.poyntonband.co.uk/ 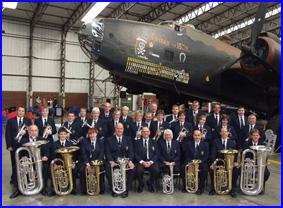 We have spent the weekend recording the Yorkshire based Clifton and Lightcliffe Band at the Brighouse Methodist Church.

The band, based at Bailiff Bridge in the famous ‘banding’ town of Brighouse is a flourishing organisation under the musical direction of former Black Dyke flugel horn player, John Clay, and the active organisation supports three bands including a learners group.

This is the second CD the band has recorded and the project is being led by David Horsefield of Kirklees Music.

You can learn more about the band on their website www.cliftonband.co.uk/

We have completed the work on the solo CD recording, “A Bit on the Slide”, by Simon Johnson, the principal trombone player with the BBC Scottish Symphony Orchestra, with Kingdom Brass.

We recorded the project earlier this year at the impressive Henry Wood Hall in Glasgow under the direction of  the professional tuba player, composer, conductor and arranger, Andy Duncan.

The CD will be released on the 1st of December and will be available on our On-Line shop.

In what has been a particularly busy time, we have also sent the work for the latest ‘Boobs and Brass’ project for manufacture.

“More Than Brass” is the second album by the Northamptonshire based all ladies’ brass band which was formed some five years ago with the sole purpose of raising money for the charity ‘Breast Cancer Campaign’. The recording, which took place at the end of September, featured some sixty players with their special guest soloists from all over the UK.

The CD will be launched at the band’s annual concert which is being held at the Lighthouse Theatre in Kettering on the 19th of November with a similar event at the Cutler’s Hall in Sheffield on the 11th of December.

To learn more about the band, which has raised £80,000 for the charity ‘Breast Cancer Campaign’ since its formation in 2006 please go to http://www.boobsandbrass.com/index.html

We have completed the work on the latest recording by the 2nd Rossendale Scout Group Band. The recording features a number of the band’s talented soloists in a collection of popular concert items which includes two vocal tracks.

The CD will be available from the first week of November although pre-orders by the band’s Patrons and regular supporters are particularly encouraging as a result of promotional work with local radio and television.

“More Than Brass” is the title of the second recording by the all female brass band ‘Boobs and Brass’. We recorded the album over the past weekend in Higham Ferrers in Northamptonshire with a band of fifty players and their special guest soloists, soprano star Michelle Ibbotson, flugel players John Lee and Mark Walters, with euphonium soloists Alison Bonnar and Trevor Groom.

The conducting duties were undertaken by Martin Dawson and John Hudson and the music recorded is a wonderful mix chosen by the soloists themselves, the players and supporters with some particularly emotional and personal requests.

The CD is due to be launched at the band’s annual concert which is being held at the Lighthouse Theatre in Kettering on the 19th of November with a similar event at the Cutler’s Hall in Sheffield on the 11th of December.

To learn more about the band, which has raised £80,000 for the charity ‘Breast Cancer Campaign’ since its formation in 2006 please go to http://www.boobsandbrass.com/index.html

We have just returned from Hampshire where we have recorded a third album with the Band of the Army Air Corps based at Middle Wallop.

The title is a follow up from their earlier recording “Where Eagles Sing” and features traditional music as well as newer music from Paul Lovatt Cooper with his title ‘Walking with Heroes’.

The recording is due for release later this year and to learn more about the band visit their website at http://www.army.mod.uk/music/corps-band/553.aspx

The Lancashire town of Bacup has a great heritage in terms of its industrial past and music making. Based on the mining and cotton industries in the valley, two outstanding brass bands originated in the town, the Bacup Old Band and the perhaps more famous Irwell Springs Band, both of which saw substantial success in earlier times and brought fame to the area.

The great River Irwell which was such an integral part of the Industrial Revolution in the north west has its source in the hills just above the town, hence the title of the new CD by the town’s current much travelled 2nd Rossendale Scout Group Band. We have spent the weekend recording the band at its headquarters in Bacup and this will be released next month.

You can hear the band this weekend at the Great Northern Arts Festival at the Bridgewater Hall in Manchester and learn more about them at http://www.2ndrossendale.co.uk/index.html.

We have just returned from the beautiful surroundings of Suffolk where we have completed three days recording with the Royal Signals Northern Band, one of nineteen TA Bands in the British Army.

The Band comes under the command of 32 Signal Regiment and is based at the TA Centre Bradford Armoury, Neasham Road, Darlington and is in constant demand for musical support from the Corps, the Regiment and the civilian community. During the past two weeks they have been based at RAF Honington in Suffolk where they have undertaken a number of local concerts, training sessions and the recording itself.

The CD will be available in late September and to learn more about the band visit their website at http://www.army.mod.uk/signals/display/19377.aspx