We have spent two further days this week in Colchester with the Band of The Parachute Regiment putting the finishing touches to their CD ‘Remembrance’ which is due for release to coincide with this year’s Remembrance Day Services in November.

The recorded items on this occasion were a second version of  John Brunning’s song ‘When Poppies Fall’. On this occasion the vocal was provided by the Scottish operatic tenor, John Innes, “The Peoples Tenor”. John, a former Army Musician has raised over £60,000 for Army Charities and all the monies raised with this latest recording will be donated to the charity ‘Help for Heroes’.

The second piece was composed, arranged and performed by the band’s saxophonist, Kate Whittaker. ‘Song for Joe’ is dedicated to her brother Private Joe Whittaker of the 4th Batallion The Parachute Regiment who was killed in Afghanistan two years ago.

To learn more about John Innes visit his website at www.johncraiginnes.com.

More details about The Band of The Parachute Regiment can be found at http://www.army.mod.uk/music/corps-band/544.aspx.

The annual concert by the Bolton Festival Choir and Orchestra conducted by John Powell was presented to a large appreciative audience at Bolton Parish Church on Sunday 29th of August 2010.

Works included Vaughan Williams’ ‘Serenade to Music’ and Handel’s ‘Ode for St Cecilia’s Day’ but the featured work was the first performance of John Ellis’ ‘The Mass of The Grove’.

The entire concert was recorded and a double CD of the event will be available shortly.

To learn more about the choir please visit their website at www.boltonfestivalchoir.org.uk/index.html. 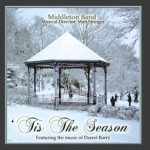 We have been asked for the third time to record ‘live’ the 2010 concert given by the Bolton Festival Choir and Orchestra conducted by John Powell.

‘A Concert of Heavenly Harmony’ will be presented at Bolton Parish Church on Sunday 29th August at 7.30pm and will include Handel’s ‘Ode for St Cecilia’s Day’, Vaughan Williams’ ‘Serenade to Music’ and the first performance of John Ellis’ ‘The Mass of the Grove’.

The new work was composed by the choir’s organist/accompanist and member of the Lakeland Composers, John Ellis. This beautiful inspiring work is based on a selection of prayers and poems and was completed by John some three weeks before he lost his battle with cancer earlier this year.

To learn more about the Festival Choir and Orchestra and to order tickets for the concert visit their website at www.boltonfestivalchoir.org.uk/index.html

More information about John Ellis can be found at http://johnellisorganist.blogspot.com/

August has started well with yet another Christmas recording, on this occasion in the beautiful Dorset town of Blandford.

Although it didn’t seem quite the best of timings to be recording such things as “The Twelve Days of Christmas” on a beautiful summer’s day in the idyllic settings of the charming Corn Exchange, the end product will prove worthwhile.

The CD, entitled “A Christmas Message”, features some great solo contributions both instrumental and vocal, a fine selection of band arrangements and a lovely contribution from a local Junior School choir.

To learn more about the band visit their website at www.army.mod.uk/music/corps-band/445.aspx and to view a selection of the pictures of the recording day visit their facebook page at www.facebook.com/group.php?gid=84698561265.

The CD will be available at the end of October.

Although it is difficult to believe after the ‘drought’ conditions we are have been having locally, the last weekend was spent recording the first of a number of projects in preparation for Christmas!

The forthcoming Christmas CD by the Middleton Band features music exclusively by Salford born composer Darroll Barry. In 1978 he enrolled on the band musicianship course at Salford University and went on to study with Joseph Horovitz at the Royal College of Music in London.

He now resides and works in Oman with his wife Rachael and is employed by the Royal Guard of Oman as Resident Composer and Arranger, a job which keeps him very busy writing and arranging music for all occasions and different combinations including bands, pipes and bands, fanfare teams and big band.

The CD will be available in the autumn but to learn more about this successful band visit their website at www.middletonband.com 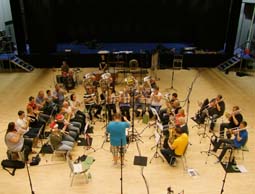 We are delighted with the latest review on the 4bars rest website of John Lee’s solo CD with the girls from ‘Boobs and Brass’, “Whatever It Takes”.

It reinforces the aims of the project, raising money for the charity Breast Cancer Campaign with every penny from the sales going directly to the charity. To date in excess of £60,000 has been raised for the charity with almost a quarter of that money from the CD sales alone.

The review concludes, ‘The transcriptions and arrangements are played with a fine sense of informed style by John (as well as a great bit of playing from Carol Jarvis on trombone) and the band accompaniment is delicate and well balanced – helped by quality producing from the MHP sound guys.‘

To learn more about the girls from ‘Boobs and Brass’ visit them at their website at www.boobsandbrass.com.

You can read the full review here, www.4barsrest.com/reviews/cds/cd450.asp

If you have not yet bought the CD you can buy one here by sending a cheque for £11 payable to Boobs & Brass and this includes  the  postage and packing.

The latest CD from the Band of  The Parachute Regiment, “70 Years of Airborne Forces”  is now available for purchase following the successful launch at an event held on the 24th of June at the Royal Hospital Chelsea.

As part of the celebrations surrounding the 70th Anniversary of the formation of Airborne Forces, The Band performed their unique marching display as well as supporting a commemorative church service to mark the occasion. Other VIPs attending the event included the newly appointed Secretary for Defence Dr Liam Fox, former Prime Minister Baroness Margaret Thatcher, and Chief of the Defence Staff, Air Chief Marshall Sir Jock Stirrup.

To view the full titles and obtain your copy of this CD please visit www.airborneshop.com/acatalog/Catalogue_MUSIC_CD_S___TALKING_BOOKS__MUSIC_CASSETTES_9.html.

We spent yesterday in Bolton completing the recording of the Millennium Chapel Gospel Choir project with RAS Audio Services.

The choir is led by Rob Wilding who is the Community Arts Manager at Canon Slade School in Bolton. He started the Choir soon after the school was granted Performing Arts status in 2003.

As a former Head of Music in the school, Rob has worked with Choirs his entire professional career, conducting large Choral works and singing professionally with ‘The Mastersingers’. This second CD by the choir is due for release later in the summer.

To learn more about the choir visit their website at  www.mcgc.co.uk

Philip Harper in reviewing ‘Whatever It Takes’  describes the recorded sound as well balanced and concludes, “this is a highly worthwhile release”.