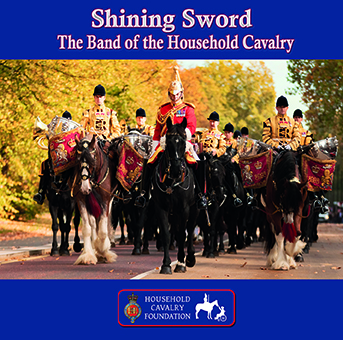 We have completed our work with ‘The Band of The Household Cavalry’ and the project is now in the process of manufacture and available for release at the end of the month..

Their new CD, ‘Shining Sword’ is the first recording by the Band for some ten years and features the premiere symphonic wind band recording of Edward Gregson’s ‘Variations on Laudate Dominum’. This extended version of the work is arranged by Rob Wiffin, presently the Professor of Conducting at the Royal Military School of Music, Kneller Hall London.

Other substantive works by English composers Philip Sparke and Nigel Hess are also included in this eclectic programme of music.

Amongst the more traditional military fayre, selected highlights include the ‘Fanfare for a Royal Wedding’. This music was written for the occasion of the Queen’s granddaughter Princess Eugenie’s wedding in October 2018 by the Band’s current Director of Music, Major Justin Matthews. By way of musical contrast, ‘Godspeed’ is exciting and innovative music by the critically acclaimed American composer Stephen Melillo.

You can learn more about the Band’s activities here or by visiting their Facebook Page.

We have spent the weekend recording with Leyland Band at the University of Central Lancashire in Preston.

The Band was established in 1946 in the heart of industrial Lancashire as the Leyland Motors Band. It took its name from the world famous truck and bus company and has seen considerable success in recent years. That success continues as they have recently qualified for the finals of the National Brass Band Championships

This recording is on behalf of the Swiss music publisher musikverlag frank  and the recorded samples will shortly be available on the publisher’s website.

We look forward to being with Leyland Band again in the early summer when we will be recording their new CD project.