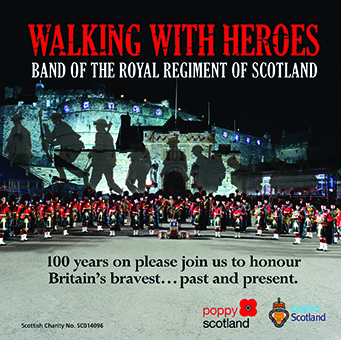 Following our visit to Edinburgh at the end of February recording The Band of the Royal Regiment of Scotland the project is ready for manufacture.

The CD is being produced, with the aim of commemorating 100 years since the end of The Great War, and to honour those who served and is timed to co-ordinate with a tour by the Band at seven venues throughout Scotland from April to September this summer. The full details of the ‘Walking With Heroes’ tour can be found on the Poppyscotland website.

The extensive musical programme includes works by such iconic composers as Holst, Shostakovich, John Williams and Karl Jenkins and features a number of new compositions and arrangements. These include traditional Scottish fayre and feature a host of soloists; in particular the unmistakable skirl of the pipes.

If you are unable to attend the ‘Walking With Heroes Tour’  the CD is well worth a listen!

You can learn more about The Band of The Royal Regiment of Scotland by visiting their facebook page.